A great way to bring in more donors and supporters is to increase awareness of your organization. What’s the most efficient way to do accomplish this goal? Run an effective marketing campaign.

Below is a list of the best nonprofit campaigns we could find. Each one of these has impacted thousands of people for good. Nonprofit organizations aren’t just using marketing to sell a product, they are selling a cause. Take notes on these campaigns and see what you can utilize for own own goals.

The campaign: Ted Talks utilized Twitter’s polling feature to ask their audience questions based on current talks and events.

Why it works: Ted Talks were already going viral at the launch of this campaign, however, implementing interactive marketing tactics helped push Ted to the next level! Using Twitter, they were able to involve their supporters and encourage interaction during and after the talks ended. Twitter allowed for a simple, easy way for people to share their thoughts and the nonprofit’s mission! This campaign is perfect example of how user generated content can raise funds!

Every social platform now offers interactive tools from polls to sliders to question boxes and fun GIFS. You can simply and easily encourage interaction by incorporating these tools into your marketing strategy. 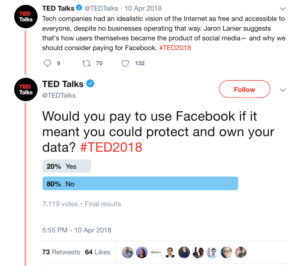 The campaign: Back in 2018, the Movember Foundation wanted to inspire men to spread awareness about men’s health. Thus, the “Mustache November” campaign was born. This high quality campaign encouraged men not to shave for one month, November, to help inspire the conversation around men’s health.

Why it works: This campaign worked well because it was easy to follow and created a community. By encouraging supporters to do something together that was unique – inspired them! This is a similar strategy that helped skyrocket the “Ice Bucket Challenge” and bring huge success to spreading awareness for ALS!

Why it works: One word – celebrities. The movie was already massively successful and a huge hit globally. This advertisement got celebrities involved, brought in audiences that wanted to relive the nostalgia of the film, and of course, brought in new supporters. Watch the video below.

The campaign: The nonprofit PERIOD, made history by establishing the first National Period Day on the 19th of October in 2019. The campaign was multi-faceted. They organized over 50 rallies in five countries and managed to trend on Twitter with their graphics and endorsements from political candidates.

Why it worked: Not only did they engage their audience with a fantastic video ad (watch below!), they masterfully incorporated social media marketing with celebrity endorsements. Also, their video harnessed the shock factor and did not allow the viewer to turn away from the truth of their campaign – that women and their periods need to be taken seriously.

A great way to raise awareness of your cause is to establish an entire day around it. This type of campaign generated momentum and support by bringing people together on a specific day. By creating a compelling video and gathering people for an event, your nonprofit can capitalize on this marketing opportunity.

The campaign: Last year, with the rising heat around police violence and gun control, the nonprofit, Courageous Conversation Global Foundation, sought to promote racial justice and human healing. With a video as part of their Not A Gun campaign, they highlighted the problem of violence against people of color.

Why it works: Not only was this campaign timed well with current social events, it covered a subject that many people felt strongly about. The video is extremely compelling. It depicts the clear bias that fights against people of color. It also highlights the racial bias in policing that often can end in people being killed with “nothing more than a candy bar” in their hands, according to the video.

The campaign: As one of the largest nonprofit organizations for young people for social justice, DoSomething.org, utilized SMS to mobilize young supporters.

Why it works: This campaign’s target audience is younger people who use SMS daily. They decided to run a texting campaign based on the popular game, “Would you rather?” In the game, the participants were asked to choose between two humorous scenarios – money-making or money-saving. After answering the questions, they would receive money-saving tips. They also had other bonuses, if you shared the game with friends you were automatically entered to win $3000! Marketing using a platform that perfectly targets your target audience and then offers a cash incentive is a great way to drum up support and interest!

Craft the Perfect Marketing Campaign for Your Nonprofit

Your marketing efforts must be prioritized in order to secure more financial stability for your nonprofit and grow your volunteer and donor base. By doing some marketing research, and understanding your target market, you can craft a marketing plan that directly appeals to your audience.

Your marketing efforts don’t have to go unnoticed. Your potential customers, donors and volunteers are waiting! We hope these 6 best nonprofit marketing campaigns inspire yours! But, if you need help crafting a killer marketing campaign, contact us.